We all have a role in protecting children 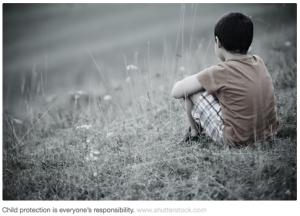 The recent string of major child sexual assault scandals, in Australia and other countries, can create a feeling of disgust and an urge to look away from an ugly reality. Yet we must confront and take collective responsibility for child protection by acknowledging that it happens every day and that we have to talk about it. Societal silence on child sexual abuse protects perpetrators and enables abuse to continue. Child sexual assault is a lot more common than we may think. The Australian Institute of Family Studies reported in 2013 that as many as one in six boys and one in three girls has experienced sexual abuse. Most recently, the media reported sexual exploitation on a mass scale of an estimated 1,400 children in Rotherdam, UK, between 1997 and 2013, and the failure of social services and the police to intervene appropriately. The Rotherdam report is full of examples of how children were groomed for eventual abuse in public view, receiving inappropriate gifts and attention from men.

Web of deceit depends on secrecy

Research shows offenders typically plan their sexual abuse of children with care. They may “groom” children by offering presents and compliments. The offender often establishes a trusting relationship with the family and friends of the child, tricking and manipulating them to reduce the likelihood of them discovering the abuse. The result of this web of deceit is to divide and isolate the child from siblings, friends and especially non-offending parents. In this way abusers protect themselves, ensure ongoing access to the child and secure power over the child and others in the child’s life. Secrecy is fundamental to the success of these grooming techniques and has powerful effects on the child. Because the rule against breaking the silence is reinforced in families as well as socially and culturally, children and adult survivors often report that they feel guilt, shame and fear when telling their stories. Self-blame, fear of retribution, a sense of powerlessness, mistrust of self and others, over-responsibility and protection of others are common effects of being trained to be silent and sexually available. Once the societal silence is broken, we must change the language we use, which currently promotes secrecy and shaming. The language and concepts that come to mind around child sexual abuse are not helpful. There is an assumption that the victimiser is a sick weirdo and the victim is damaged goods. But because it is so common, we regularly interact with both perpetrators and victims of child sexual abuse in our daily lives. Indeed, they may be people we like and admire. The frequency of this problem suggests that sexual offenders are not all paedophiles, evil or “sick” but ordinary family members and friends. It also tells us that many victims of sexual abuse manage to deal with the effects of abuse, live productive lives and contribute to the well-being of our communities.

Fortunately, it does not necessarily take much to stop child sexual abuse. Because this type of exploitation thrives on silence and secrecy, the antidote is bringing the issue to light. We need to create an atmosphere that encourages people to question confusing or uncertain behaviours and practices in order to take action before children are harmed. This means being willing to take the risk of potentially looking paranoid when questioning an adult’s behaviour toward a child. We also need to reexamine our policy approach to child sexual abuse. The current dominant model prioritises individualised, one-on-one counselling services. Other responses to people who have experienced childhood sexual abuse, such as community development, preventative approaches and collective social action, are restricted to the margins of practice. Some services, such as the West Street Centre, a government-funded, community-based organisation in Wollongong, New South Wales, offer an alternative. The centre links individual talk-based therapy and group work to collaborative and community efforts to tackle issues of abuse and violence. Survivors of child sexual abuse join with others to challenge secrecy and speak up about their experience. Listening by other community members is emphasised. In this way, survivors of sexual abuse begin to pioneer a new way for their families and communities. When children hear adults talking openly about sexual abuse, they learn from example and follow. Child protection cannot be a job that is relegated to an authority, be it the police, social services, or a school. Child protection is everyone’s responsibility. Children will be protected when everyday citizens take personal responsibility for child protection. This will start when people are willing to have hard conversations, change the assumptions about child sexual abuse victims and perpetrators, and have the courage to act when they have concerns about the children in their communities. We all need to look at this issue, not look away.   By Amy Conley Wright, University of Wollongong and Lynne Keevers, University of Wollongong on The Conversation http://theconversation.com/profiles/amy-conley-wright-136961   <p><span>By <a href=”http://theconversation.com/profiles/amy-conley-wright-136961″>Amy Conley Wright</a><em>, University of Wollongong</em> and <a href=”http://theconversation.com/profiles/lynne-keevers-107883″>Lynne Keevers</a><em>, University of Wollongong</em></span></p>]]>
Social Share:

Get the latest CanberraMums news straight to your inbox!